Yunnanyi Ancient Tea Horse Road is located in Yunnanyi Town, Xiangyun County, 21 km from the county seat of Xiangyun County. In 109 BC, Yunnan County was set by Emperor Wudi in Han Dynasty, Yunnanyi as the county seat. It is the birthplace of ancient caravan culture of Yunnan. Millions of caravans came here and went to diverse places, connecting diverse ethnic groups and colorful culture along the ancient road. Yunnanyi is the important station of the ancient road, enjoying the history of more than 1200 years. At that time, with the prosperity of the salt industry, the salt merchants were inextricably linked, and the ramps were frequently transported. The slabs on the ancient roads still have traces of horseshoes. The station is specialized, large-scale, and well preserved, and it is unique in the Southwest Silk Road.

How to get to Yunnanyi? 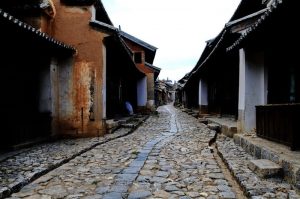 In 109 BC, the important part of the ancient tea-horse road, Yunnanyi, entered the Western Han map, which was Yunnan County. Yunnan Prefecture was established in Shuhan, and the government was in Yunnanyi. In the Yuan Dynasty, Yunnan Province was set up. Since then, “Yunnan” has become a province, and it was maintained till today. As one of the oldest stations in Yunnan Province, Yunnanyi is a bright pearl on the ancient tea-horse road. It once became an important political, economic and cultural center in western Yunnan.

The ancient road in Yunnan was built in the opening of the Baiyan Salt Well in the Northern Song Dynasty (972 years). It was the main transportation channel for Baiyan Salt Well to the west of the Yunnan. The road was 1-2 meters wide, and it was paved with slabs. With the prosperity of the Baiyanjing salt industry, the salt merchants have a long history of rushing, and the ramps are frequently transported. The zebra stone in the middle of the stone road in the ancient road ruins still has traces of horseshoes. In Qing Dynasty, Yunnan became the most important and prosperous station on the Ancient Tea Horse Caravan Road. These horses, which come to the west, transport leather and medicinal materials to the east, and transport tea, cloth, salt and department stores to the west. In order to provide the place for rest and accommodation, Yunnanyi had established more than 20 horse shops, which were lined up to provide various goods for the passing cars.

When the weather is fine in Dali, the sunshine is heated, and ultraviolet light is strong. People should avoid direct sunlight, and the sun hat preparation is required during outdoor activities, a pair of sunglasses will make you comfortable in the trip.