The location of Jingmai Mountain Bailian Manor (景迈山柏联庄园) is the first of six major tea mountains in Lancang River (澜沧江) basin, and also the best raw material quality in the area of Big leaf kind of tea (大叶种茶). It is located in the intersection of the middle and lower regions of the Lancang River (澜沧江) and the Tropic of Cancer, with an east longitude of 100 degrees and an altitude of 1100-1700m, which from the tea district map of Chinese National Geography (《中国国家地理》).

About 1700 years ago, Barang tribal (巴朗部落) leader Ba yangleng (叭岩冷) was conferred by the King of Dai to Jingmai Mountain (景迈山), who established Ba Yangleng Tea Manor (叭岩冷庄园), and led his clan to domesticate and cultivate the wild tea trees, so he was honored as “the ancestor of tea” by later generations. So far, Jingmai Mountain (景迈山) still completely preserves the oldest and largest artificial cultivated tea garden in the world. On October 1, 1950, the leader of the Blang People (布朗族), Surya (苏里亚), went to Beijing to attend the National Day ceremony and presented the old trees’ tea of Jingmai Mountain (景迈山) to chairman MAO. In 2001, at the APEC (亚太经济合作组织) meeting, the Chinese government gave Jingmai Mountain tea (景迈山茶) to the heads of state as a national gift. In 2008, the Organizing Committee of Olympic Games (奥组委) selected it as “national gift tea for the Beijing Olympic Games” , which named national tea no. 1, and gave it to heads of state and delegations. In 2013, Jack Ma (马云) and Jet Li (李连杰) ordered Puer Tea (普洱茶) at Jingmai Mountain Bailian Manor (景迈山柏联庄园).

Jingmai Mountain (景迈山) is home to the Blang (布朗族), Dai (傣族), Lahu (拉祜族), Wa (佤族) and Hani (哈尼族) ethnic minorities, and they have been living with tea for generations, forming a lifestyle interrelate with tea. The ancestors of the Blang People (布朗族) first discovered the function of tea. Shankan Festival (山龛节) and Jichahun Festival (祭茶魂) are the traditions of all ethnic groups in this mountain to worship tea trees, which have been continued for thousands of years.

“A Mountain Manor” created according to EU organic standards. 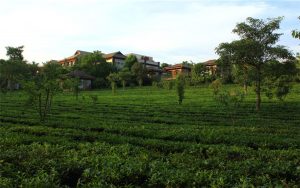 In European history, French wine has a hundred years of manors and a hundred years of history, each manors is a cultural history of origin of French wine. In Jingmai Mountain (景迈山), the tea of garden, workshop, cellar, Shanzhai, Buddhist temple, ancestor worship, hotel, museum and ceremony constitute the fresh content of the manor. The values of Bailian Manor (柏联庄园) are the same as those of French manor, focusing on the origin, technology, vintage, cellar and cultural connotation.

The only tea mountain declared as “world heritage” by the ancient tea garden. 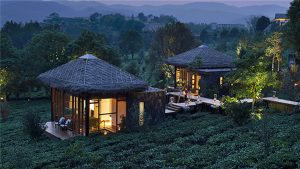 During the past ten years, with the concept of “productive protection” and “living inheritance”(“精养、慢熟、少产”), it returned to the traditional production mode of intensive cultivation, improved soil organic matter, planted sparse tea garden, and completely preserved the farming culture, traditional skills and natural survival state of Jingmai Mountain (景迈山). The inheritance of the traditional craft collects and protects the tea making technology of the ancient law, so the manor produces “hand-fed” and “slowly aged” manor tea.

The 28,000 Mu millennium ancient tea garden in Jingmai Mountain (景迈山) has a complete ecosystem, without chemical fertilizers and pesticides, and relies on the biological diversity of the community to prevent diseases and insect pests. In 2012, here was successfully selected into the preparatory list of world cultural heritage in China.
Translater by Li Xueli/李雪丽
Chinese Version:
http://www.puercn.com/puerchanews/ppxw/113732.html