For centuries, tea from the East has kept enchanting the Western world as a mysterious and delicate drink. Some even praise it as the “Green Gold”.

It is now widely acknowledged that tea was originated around southwest China, notably today’s Yunnan. And a cup of warm tea with slight herbal fragrance has always been the first, and perhaps the best thing that a host can ever serve his guests upon their arrival.

A tea-drinking culture, without any doubt, is embedded in the everyday life and memory of all residents who live on this land.

Etymologically speaking, the Chinese character for tea – comprising three radicals which represent grass, human, and wood, respectively – has remained the same written form for over a millennium since the Tang Dynasty (618-907 AD). Yet the way to pronounce it varied from one place to another, due to the huge and sometimes radical differences among regional dialects in China. And this is still the case.

That’s why tea is called “chai” in today’s Russian and Hindu, being brought directly from Mandarin’s “cha”, while in English, French, Spanish and Italian-speaking countries, a sound resembling the “te” in Hokkien, a common dialect of Fujian province, has been shared, as these countries came to know about this beverage from the tea growers and merchants there in the first place. 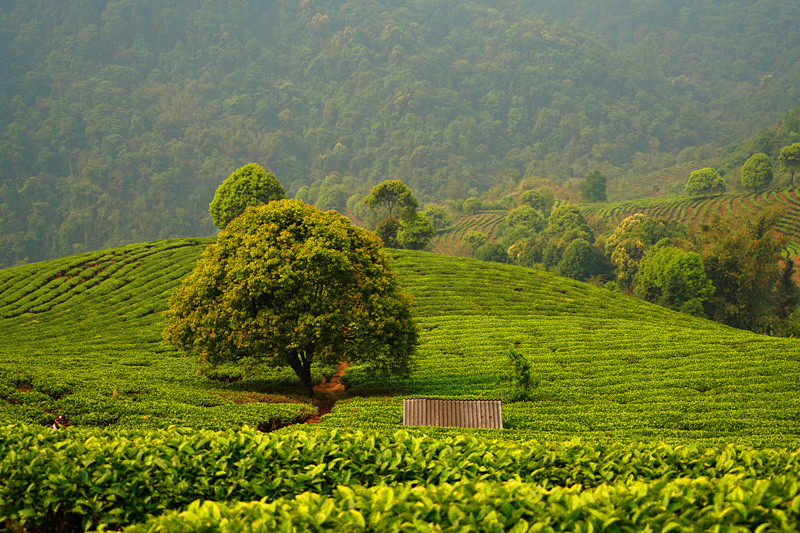 The distribution of tea plants in Yunnan is pretty wide. Wild tea trees have been found in 12 out of 16 prefectures of it in all. And production areas are scattered across the province, from Pu’er and Xishuangbanna down the south to Honghe and Wenshan along the southeast border, and then to Lincang, Dehong, Baoshan and Dali, sitting on its west side.

According to statistics from 2014, Yunnan now owns over 3,000,000 mu (appriximatley 200,000 hectares) of old tea plantations. The Mengku Tea Garden in Shuangjiang, Lincang – which recently has been selected as a candidate by the Ministry of Agriculture and Rural Affairs of China to vie for the GIAHS (Globally Important Agricultural Heritage Systems) of the United Nation – certainly proves Yunnan’s distinctive nature for tea cultivation.

It’s worth noting that Yunnan is the home of some of the oldest tea plants on the planet. The 800-year-old “king tea tree” in Menghai, Xishuangbanna, and an even elder on which is believed to have erected in Zhenyuan of Pu’er county for as long as 2,700 years, have together witnessed the unbelievable natural and cultural history of tea in its birthplace.

Recently, a number of ecological tea gardens have mushroomed around Yunnan, in which tea trees are inter-planted with a range of other crops, including soybeans, peanuts, potatoes as well as oriental cherries. Aesthetics is apparently not the main reason for doing this. In fact, interplant can help ward off pests and diseases effectively.

The Birth of Pu’er

A good cup of tea is determined by several factors. And the primary one must be the natural-climatic conditions of the place where tea garden locates. The warm, humid and foggy areas of southern Yunnan provide a decent environment for the growth of tea trees. Some amazing chemistry done by the nature has been detected, which gives a particular taste and aroma to the teas being grown here. Pu’er is the best example of this.

Pu’er tea, as one of the few fermented black teas that can be found in China, is an exclusive product of Yunnan. It can be roughly divided into two categories: the raw Pu’er and the ripe one. While raw Pu’er is marked by its strong flavor with some bitterness, the latter would rather offer a much milder and smoother taste. The process of making the tea involves several steps, including pan-frying (with an aim to suddenly stop enzyme activities and oxidation), leaf rolling, sun drying, fermenting as well as compressing.

Compression was a useful practice to help facilitate the transportation of tea in ancient time, but now it’s more like a type of packaging and representation. Cubed, round and pie-shaped Pu’er tea products can all be encountered in tea shops easily. And similar to red wine, they can normally be stored for many years before taking out for enjoying. 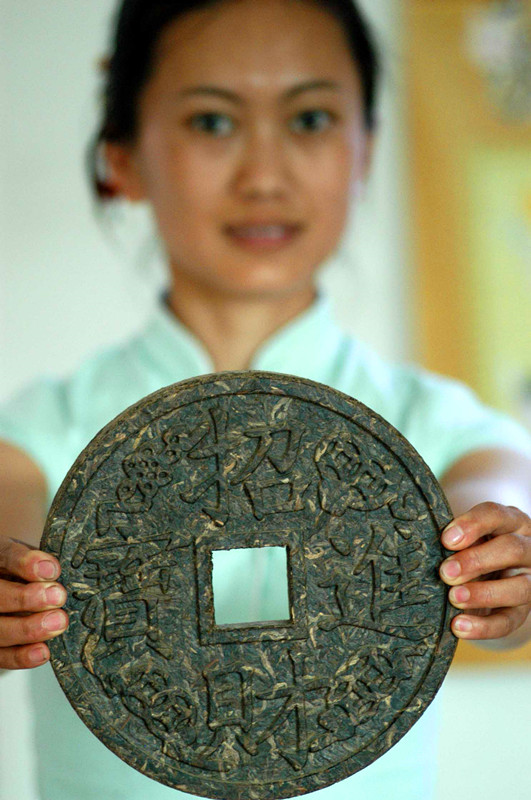 In the history, teas of Yunnan might not be as popular as those from other provinces, like Fujian and Zhejiang, but after several years of endeavor, they have been successfully transformed into one of the most reputable products on both domestic and international markets.

As the homeland of 25 minority groups, Yunnan has long been famed for its unique ethnic culture and folklores. And nearly every group, interestingly, seems to retain their own tea-drinking habit. Tea is not merely indispensable in their daily consumption; it stands for an important gesture of hospitality.

The Three Course Tea is such a tea ceremony prevailing in northwest Yunnan’s Dali. It is prepared by the local Bai minority specifically during festivals or in the presence of distinguished guests. The ceremony, as its name implies, consists of three rounds of tea drinking and tasting. 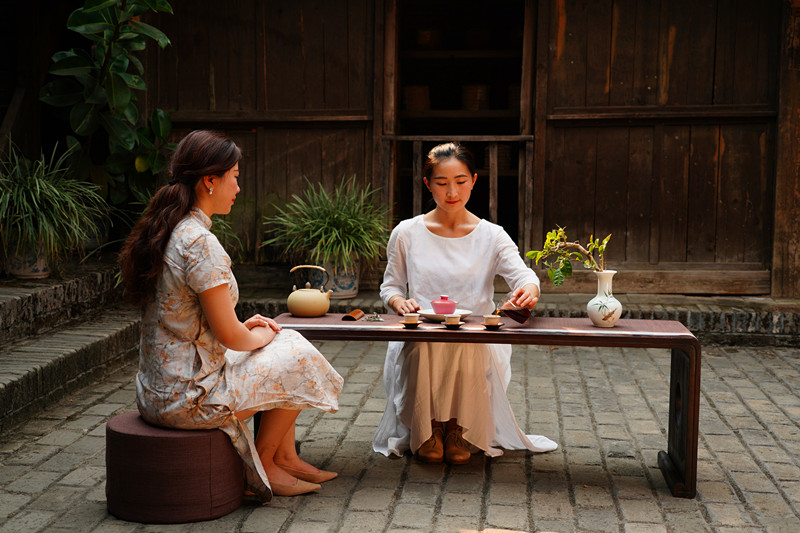 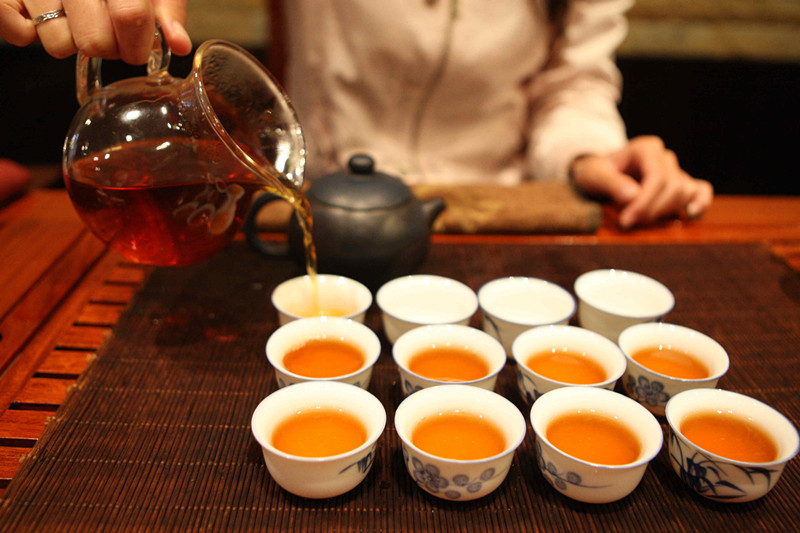 The first one, featuring the natural bitterness of tea, symbolizes the hardship that one has to get through before succeeding. The second – being brewed together with some brown sugar and dried citrus peels – has sweet and fruity taste which intends to remind the guests of those joyful moments in their life. And the final course is an absolutely surprising one, because honey, ginger and even Sichuan pepper will be added into the tea pot to create a quite mixed and perplexing sense in your mouth before the ceremony ends.

This is more than a sip of tea. It is the taste of life!

Apart from the Bai people, tea drinking has been seen in the culture of many more ethnic minorities in Yunnan, like the Hani, Dai, Lisu and Buyi.

Yunnan is carrying out a five year plan to develop tea into an industry of over hundreds of billions of RMB. The province gives priorities to the development of Pu’er tea, black tea as well as green tea, and focuses on improving the quality and efficiency of the industry. Aiming at increasing tea farmers’ income, Yunnan also highlights the technological innovation and integrated development of primary, secondary and tertiary industries. Eventually, a tea industry system closely linked to sectors of economy, ecosphere, culture and tourism will be seen.

In order to highlight the diversity of ancient tea products, 30 ancient tea bases are designated to be established, in a bid to forge the tea industry of Yunnan with high benefits, distinctive features and competitiveness.

Developing the internet of things among tea gardens is another driving force. In the future, information of management, environment monitoring, and quality control will be genuinely integrated into tea growing and processing.