Bangwai village(邦崴村) is located in Fudong township in the north of Lahu autonomous county of Lancang, Yunnan province. Lying by the Lancang river , it is also at the junction of three counties of Lancang, Shuangjiang and Jinggu. In the Qing Dynasty , Bangwai was one of six mountains in produce Pu’er Tea ,that a important place on production tea. The average annual temperature in this area is 16.8 degress Celsius . Sunny, mild climate, summer is not hot, winter is not cold, the beautiful mountain and river in all year , which is good for the growth of high- quality tea .

There are 730 residents with a population of 2792 at Bangwai village, main nations is the Han nationality and Lahu nationality. Ancient tea tree is mainly distributed around every villages , combining patch planting with sporadic planting,the mainly tea variety is big leaf Pu’er Tea. There are more than 6200 mu of tea in the village ,the area of ancient tea is more than 1650 mu and more than 100,000 plants ; the age of trees is over 500 years. There are more than 2286 tea plants whose base diameter is more than 20 cm, some tea trees can be sold over 10,000 yuan, the anuual output value of single The second Tea of King of Bangwai is more than 80,000 yuan. 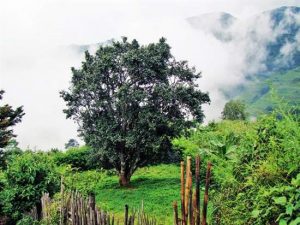 This is a story that most Chinese and Indian have never heard of: on 8 April 1987 , National center Post Office Center has issued a set of four stamps on tea《茶树》. The first of stamp on tea is ancient tea of Bangwai on Lancang, Face value is 50 points. “The national business card” ended more than a century of disputes over the origin of tea plants, declare to the world: Lancang Bangwai ancient tea ,invented in 1991 , is the only obsolete transitional tea tree invented worldwide so far. Tea is not originated in India, but in Yunnan, China. Specific coordinates directly refer to Lancang Bangwai.

Bangwai tea plant (邦崴古茶树) is large arbor –type tea tree, the shape of tree is straight, dense branches, 11.8 meters high, 8.2×9.0 meters wide, the diameter at the rhizome is 1.14 meter. The lowest branch high 70 cm, 3 primary branches and 13 second branches. The average length of tea leaf needles is 13.3 cm, the shape of leaf is long ellipse, the top of leaf is pointed, leaf surface is protruding, glossy, a slightly undulating leaf margin , leaf body is smooth or inward folding, leaf texture is thick and soft, leaf dent is shallow, leaf veins 7 to 12 pairs, back of blade , main veins and petiole is bushy. Scales, bud leaf, young shoots is hairy, the yellow and glue bud leaf, the middle of bud long 3.7 cm .Corolla is big, average diameter is 4.6×4.3 mm, green, glabrous outside. Eyelashes on the edge, hairy inside, the average length of Stalk is 13.7 cm, 2 or 3 bracts, fruit diameter is 2.8×2.5cm on average, fruits flat round or kidney-shaped, green peel with micro-hairs, in addition to embryo marks on the exocarp, there is a sunken round mark .Lt has strong plasticity resistance and no cold or early cold happened.