What to see in Lijiang Ancient Tea Horse Road Museum

Like the Baisha murals, the six fresco paintings in the museum are the only examples of the Ming dynasty mural paintings in Yunnan Province. These paintings are listed as provincial cultural relics. The now overall protected surrounding buildings are the teaching buildings of Shuhe Primary School during the period of Republic of China. Here, tourists can have a deeper understanding of the history and culture of the tea and horse road.
The museum is divided into five exhibition areas, including the Preamble Hall, the Murals Exhibition Hall, and History Hall one, History Hall Two, Shuhe Living Hall, and Shuhe Cobbler men Hall. They all demonstrate the long history and profound culture of this area to the tourists.

About the Preamble Hall 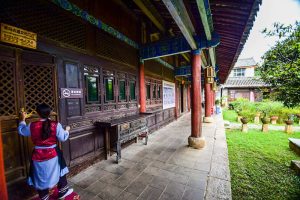 In 641, emperor of Tibet  Srongtsen Gampo(松赞干布) was successful in his quest to marry Princess Wencheng of Tang Dynasty. After their marriage Princess Wencheng (文成公主) went to Tibet and brought in advanced production methods as well as tea customs.
During the years 742 AD to 756 AD there was a lot of tension between Tang Dynasty and the Tibetan Regime. The Emperor of Tang banned tea trade to Tibet. This led to the Tibetan Regime using the previously opened Yunnan-Tibet channel to solve the tea crisis. Yunnan tea traveled to Tibet, and from there it was distributed to India, West Asia, and Europe.
From the Song and Yuan Dynasty to the Ming and Qing Dynasty, tea and horse trade were greatly expanded due to political, military, economic and other reasons. As a result, the Ancient Tea Horse Road became the link to contact the southwest of the nation and the central dynasty. During the anti-Japanese War period, China’s sea channel was blocked by the Japanese. Because of this blockade the ancient tea-horse trail became the only international channel for a large number of strategic materials to be transported into the Mainland. This gave a tremendous amount of support to the war effort, and it encouraged the development of towns along the ancient road.
Lijiang City, located in the Yunnan-Tibet hub, is an important gateway to the Tea-Horse Road. The relationship of the ethnic and religious cultures of the Naxi people and the Tibetan people has made the Naxi people an important participant in the trade of the Tea-Horse Road. Thanks to this channel, both Chinese and foreign explorers can repeatedly enter the Lijiang and the Three-paralleled Rivers to introduce the region’s biodiversity and rich cultural diversity to the world.
Lijiang Ancient Town (including Shuhe residential complex) was listed as a World Cultural Heritage by the UNESCO in December 1997, and the Three- paralleled Rivers was listed as the World Natural Heritage in July 2003. In addition to these honors Dongba ancient literature of Naxi people was also listed as a World Memory Heritage in August 2003.
The Ancient Tea Horse Road, one of the oldest and most significant trade channels in mainland China, is comparable to both the Northern and Southern Silk Road. This trade road also left many lasting and profound effects on the people including religious and ethnic migration.

About the Murals Exhibition Hall

The Dajue Palace Mural is an extremely important component of Lijiang Murals. The Lijiang murals were drawn in succession for 300 years from 1385 AD to 1743 AD. These murals are seen as miraculous due to the fact that there are preserved on such a large scale in the wild land of the southwest China. The existing 6 murals were drawn in the Ming Dynasty duing1573 AD to 1620 AD. Dajue Palace is located in the Lijiang ancient city, 4 kilometers northwest of the Shuhe village.
On the tea horse road which has a long history over thousands of years, there were many significant events happened. These events have far-reaching impact on the later-on history. The museum will introduce visitors to the Tibetan Regime’s Conquest towards the South; the Tianbao War, how Yunnan tea was introduced to Tibet, the tea and horse market, Kublai Khan’s troop crossed the Jinsha River by leather rafts, and other significant historical events.
The buildings of the Museum were part of the original component of Shuhe Yard of Chieftains Mu more than 400 years ago. Dajue Palace mural was drawn by the famous painter Ma Xiaoxian, which has been preserved in its original form. It is a skilled brushwork mingled with the style of Tang Dynasty, and was listed as the Provincial Key Protection Units in 1998. 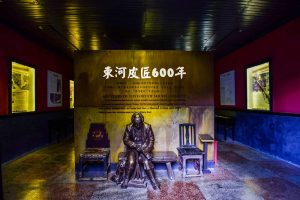 The Tibetans conquered land to the south of them and set up the Shenchuan Government Mansion in Lijiang. This was the beginning of the Tea Horse Road. The Ming Emperor of Tang Dynasty banned the trade of tea from the Central Plain to Tibet, which contributed to Yunnan tea being exported to Tibet; the military needs of Song Dynasty stimulated the “tea horse market boom”; from Yuan and Ming dynasties to modern times. The Tea Horse Road became the communication link for economic and cultural exchanges among Yunnan, Tibet, and Sichuan Province.
The Tea Horse Road started in the south of Yunnan Province and traveled from Dali, Lijiang, Diqing, and Lhasa. The road ended in India. It attracted people with the artistic style of western China and the enchanting natural scenery of Three-paralleled Rivers and “Shangri-La” area. The Tea Horse Road Museum introduces its visitors to the beginning of the road, the transporting lines, and the major historical events of the Tea Horse Road. It is an important window for people to understand the history and culture of the Tea Horse Road.
The Tea Horse Road derives from the tea and horse market in the southwest of ancient China, and was developed in Tang to Qing Dynasties, and peaked in the late World War II era. It is divided into two routes. The Sichuan-Tibet and Yunnan-Tibet which connects Sichuan and Yunnan and extends into Bhutan, Sikkim, Nepal, India, and even to West Asia and West African Red Sea coast. The Yunnan-Tibet Tea Horse Road was formed in the late 6 century AD. It began in Simao (Pu’er), the main tea producing areas of Yunnan. After Dali Autonomous Prefecture, Lijiang region, Shangri-La and Tibet, it made it’ way to Lhasa. From there it reached India and Nepal. It was a very important trade channel of ancient China and South Asia. What’s more, Pu ‘er is a unique place of origin and transit of the ancient tea horse road, with a long and rich history.

First of all, People need to go to Shuhe Ancient Town, for  Lijiang Ancient Tea Horse Road Museum is there.

● The peak period for visiting Lijiang Ancient Tea Horse Road Museum is from May to October. Actually, It is worth visiting during any season, so if you do not want to experience a crowded scene, avoiding that period might be a good option. 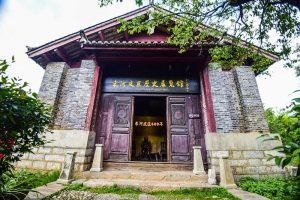 Shuhe Ancient Town is an important constituent part of Lijiang Ancient City, a world cultural heritage site in China. There are many high-quality hotels in the old town although the quantity is not as good as that of Lijiang Old Town. Shuhe old town is much more tranquil than Lijiang Old Town, less crowded and less noisy, and the air is very good at the foot of the mountain. Follow Yunnan Exploration to discover the best hotels in Shuhe Old Town such as Banyan Tree Lijiang.

Located in Shuhe Old Town, Lijiang, Banyan Tree offers a relaxing retreat away from the city. Surrounded by fresh mountain air and green landscapes, the property features luxurious accommodations with traditional Naxi-style décor and free Wi-Fi in all areas.

Only a short 1-minute stroll from Shuhe Ancient Town, The Bivou features accommodations in local and modern styles combined together. Blending in by making use of the barbecue facilities, lazing in soothing massage, going horse riding or enjoying a fun time with your children at kids’ club seems like a nice getaway. Free Wi-Fi is available in all areas. 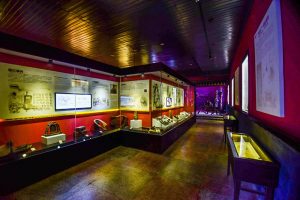 The altitude is about 2,400 meters or about 7,800 feet. Some people may get some altitude sickness. So take it easy the first day or two.

Travel light when strolling in the old town. Bring a camera with you that you can take photos along the way. Sunlight is very strong in Lijiang, wear sun protection such as hats, sunglasses and use sun block, etc.

Do not miss the bars in Lijang. They are a part of life. The bars in Shuhe Old Town is more quieter than Lijiang old town.

Just like Lijiang Old Town, Shuhe Old Town has many high-qualify hotels or hostels for you to choose from. The recommended hotels are Banyan Tree Lijiang, Lijiang Conifer Lishui Yangguang Hotel, etc.

1. If you plan to travel to Lijiang during the peak tourist season (Spring Festival, May Day, Summer holiday, and National Day holiday), be sure to reserve a room in advance.

2. There used to have carriages getting in and out of this town, so be careful.

3. It is best to wear cloth shoes or sneakers when walking in the old town, because they are all slabstone path, it is easy to twist your feet with high heels.

4.Take rain gear when you visit in the rainy season, and the slabstone path are slippery after the rain. Pay attention to that.