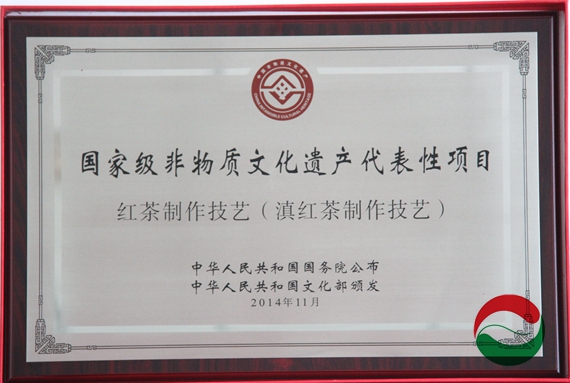 “Yunnan Black Tea Production Techniques滇红茶制作技艺” originated in 1938 and has been inherited for nearly 80 years. It was inherited and developed by Yunnan Dianhong Group (Former Yunnan Fengqing Tea Factory)云南滇红集团股份有限公司（原云南省凤庆茶厂）. It mainly spreads the traditional Yunnan Black Tea Culture in Fengqing County, Yunnan Province. It includes seven cultural connotations: the tea ceremony of “Hood”“厚德”, “Seiko”精工”, “Tranquility”“恬静”, “Unique product system”, “Tea-making skills handed down orally”, “Tranquility of mind, Forgetting both things and me”“平心静气、物我两忘”, “Teachers and apprentices” system“师带徒”制度, the management of old tea houses and conscience culture practiced by successive generations. It is a typical representative of Yunnan tea and is handed down in China. It is an important component of black tea.

Yunnan black tea was born in the early days of the outbreak of the Anti-Japanese War. At that time, in order to find new tea resources, develop new tea products, marketing and export to raise funds for the War of Resistance Against Japan, Mr. Feng Shaoqiu冯绍裘 went to Shunning (today Fengqing) and used the local large-leaf tea as raw material. The experiment succeeded in Yunnan black tea. The birth of Yunnan Black Tea not only fulfilled the national needs, but also pioneered the production of Yunnan Big Leaf Tea, which was praised as “Anti-Japanese War Tea”“抗战茶” and “Patriotic Tea”“爱国茶”. 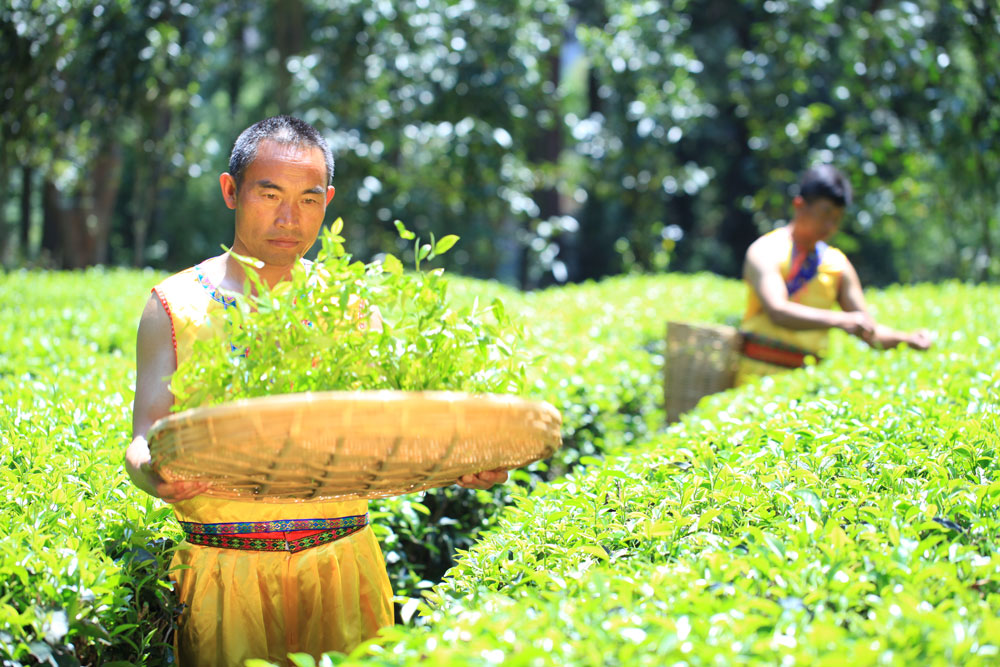 “Yunnan Black Tea Production Techniques” is rooted in the exquisite skills of the older generation of tea experts such as Feng Shaoqiu冯绍裘 and the rich soil of large-leaf tea planting in Yunnan. On the basis of inheriting the tradition, we have absorbed the strengths of all families, adhered to the belief of “making tea to accumulate virtue”“做茶积德” and “selecting materials properly”“选材精当”, inherited and carried forward the values of “making tea for the world, making tea for the people and keeping tea healthy”, “制茶济世、制茶为民、制茶养生” and created “Dianhong Kungfu”“ 滇红工夫 ” and “classics 58″“ 经典58 ”. A large number of Yunnan black tea products, such as “Golden Bud”“ 金芽 ”, “Plateau Red”“高原红 ” and “China Red”“中国红”, have unique quality styles, such as tight outline, plump and strong bud leaves, dark color, golden millimeter, bright soup red, rich aroma, strong and fresh taste, and are popular with the majority of tea people. Yunnan Red Tea Group has always been a designated manufacturer of black tea exported by the state. The national black tea sample set of “standard physical samples” sample preparation unit has fulfilled the enterprise mission of “creating a healthy and beautiful life for mankind”, and has played an active role in promoting human health, health care and other aspects. In 1958, Yunnan Red Gongfu Super Tea was recognized as the national foreign affairs gift tea. In 1986, Queen Elizabeth II伊丽莎白, who came to China as a national gift, won honor for the country. In 2012, Yunnan Red Group was recognized by the Ministry of Commerce as an “old Chinese brand” enterprise“中华老字号”企业. 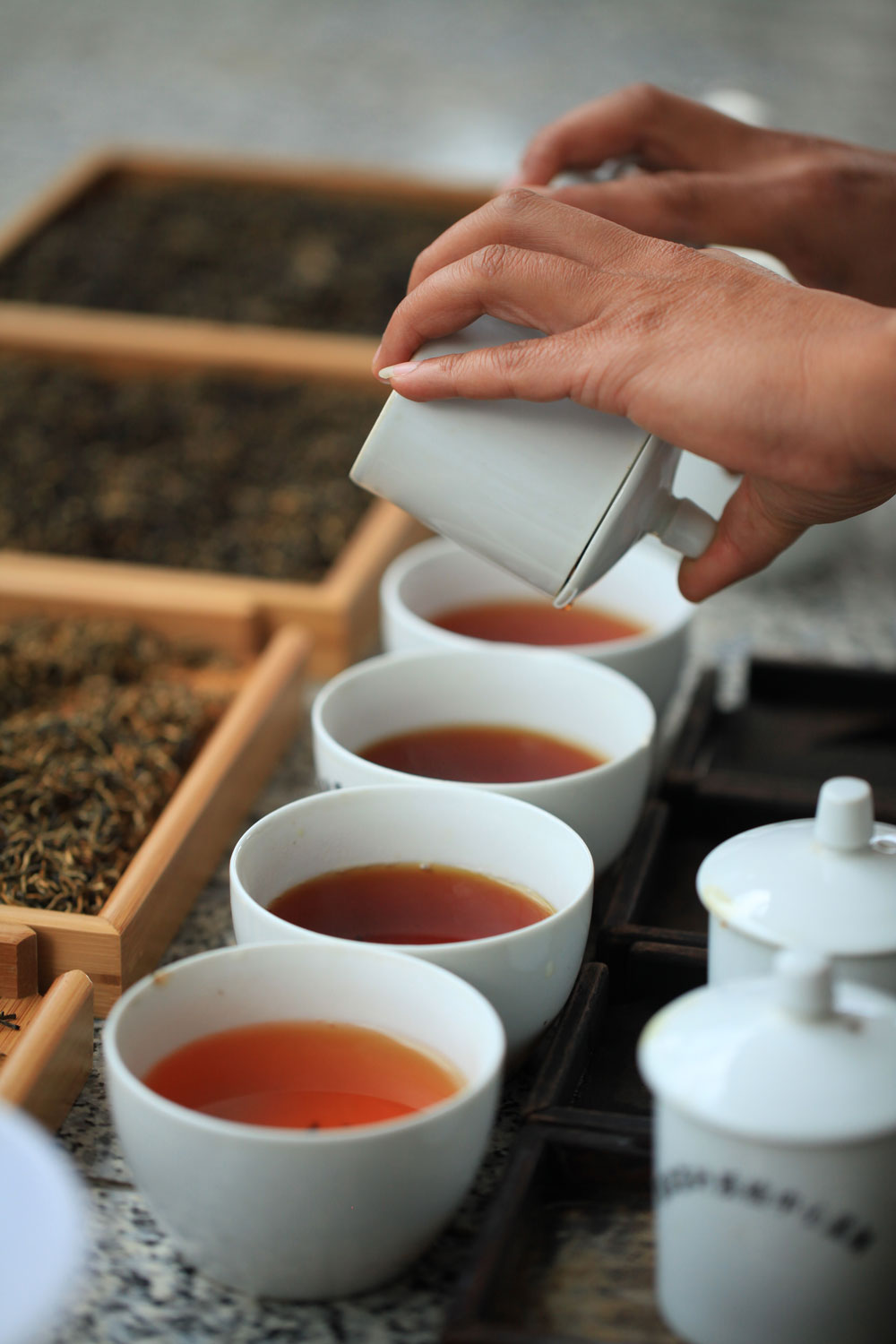 “Yunnan Black Tea Production Techniques” has a worldwide impact, with significant Yunnan local characteristics and product advantages. From its inception to the present, it has promoted the rapid development of Yunnan tea industry, increased the output of tea products, greatly improved economic benefits, promoted the income of tea farmers, financial growth, enterprise efficiency, laid the foundation for the development of Yunnan tea and Yunnan black tea to become a world-renowned black tea, with high protection and inheritance value. On the basis of protection and inheritance, the project further excavates and improves, which can add a new mode for the development of “Yunnan Tea”, and will also play a positive role in demonstrating the protection of local superior products in the whole province. Therefore, it has prominent historical, cultural and scientific value.

The traditional production techniques of Yunnan black tea include withering萎凋, rolling揉捻, fermentation发酵 and drying干燥. The first is withering: after a period of natural water loss, the fresh leaves of tea become withered and withered. After withering, water can be evaporated appropriately to facilitate shape. At the same time, tea fragrance is appearing, which is an important processing stage to form the aroma of Yunnan black tea. Secondly, twisting: the withered fresh leaves are twisted, and the strength and time of the twisting are grasped by the tea maker.

The purpose of the twisting is to shape the tea leaves in the process of twisting and increase the concentration of color, fragrance and flavor. The leaf cells are destroyed to facilitate the next fermentation. Fermentation: Leaf cells oxidize under the action of enzymes. Leaf color changes from green to reddish or cauliflower yellow, forming the quality characteristics of Yunnan black tea “Black Leaf Red Soup”“红叶红汤”. Through moderate fermentation, grass gas disappears and has ripe fruit aroma. Finally, drying: the fermented green tea is baked at high temperature, evaporating water rapidly, and achieving the quality and dryness of the process, to obtain the unique sweet flavor of Yunnan black tea. 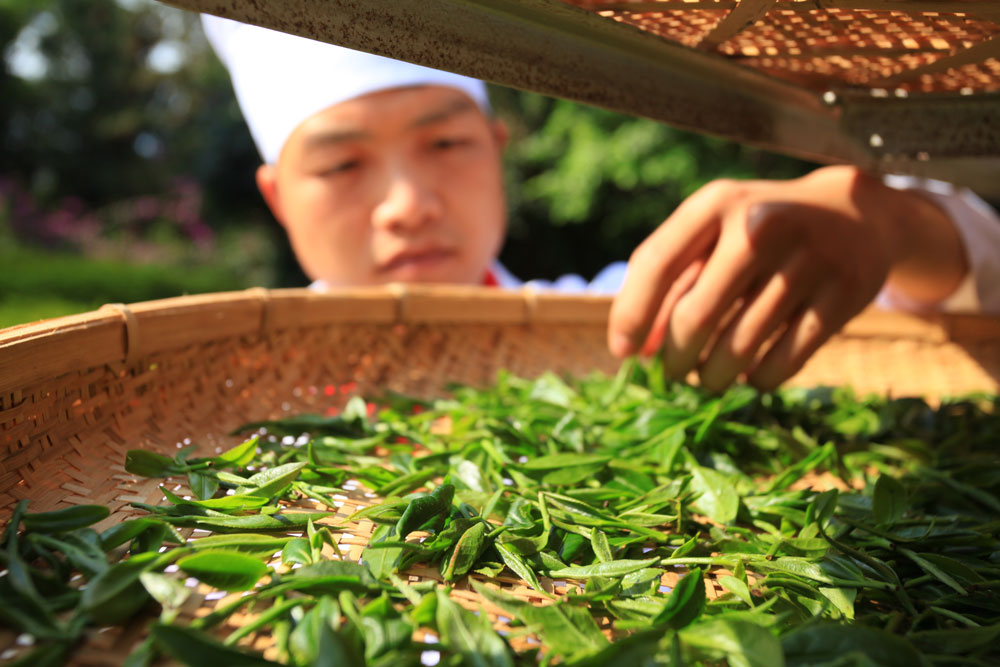 Yunnan Black Tea is manufactured by hand. In the production process, it is the key technology to implement the primary system, that is, “five checkpoints of the primary system”“初制把五关”. Yunnan black tea products have specific shapes, heavy bones, uniform color, bright red soup after brewing, Golden Circle prominent, fresh aroma, strong taste, stimulating, even bright red leaves, milk still has a strong tea flavor, brown, pink or turmeric bright, with strong, strong, fresh characteristics. Yunnan black tea traditional production technology contains rich and profound tea culture. It is one of the important techniques in Chinese black tea production technology. It is also the crystallization of the practice and wisdom of tea science and technology experts and tea farmers. 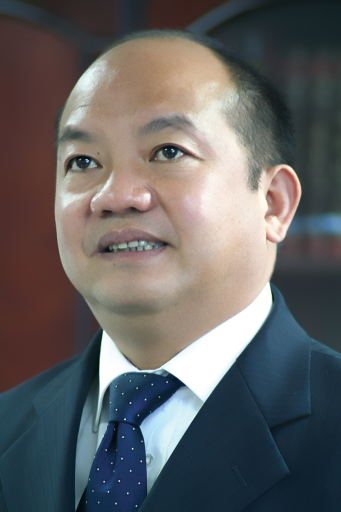 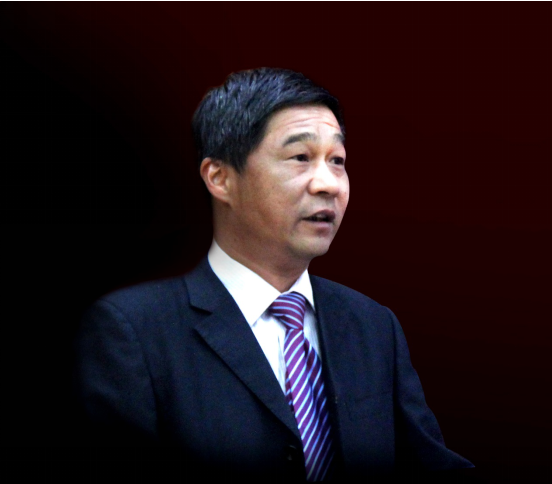 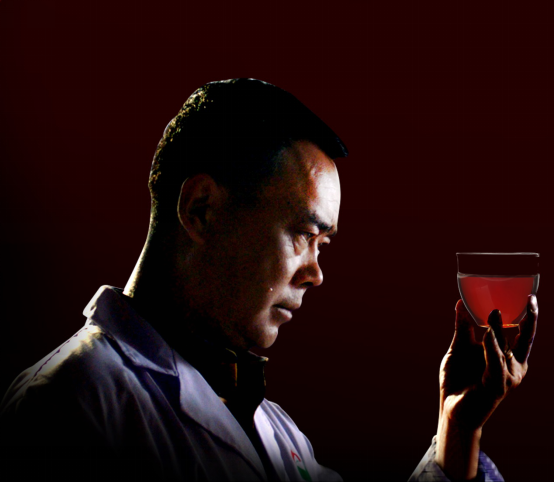 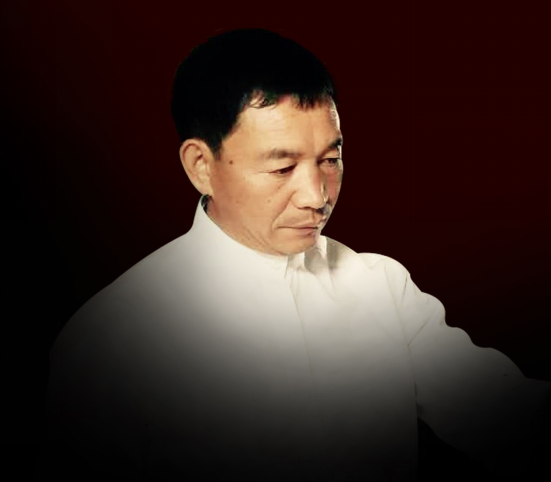 Dianhong tea plucking standard: bud only, one leaf and bud and two leaves and bud. Every kilogram of high-end bud only series products takes 80, 000 tea buds picked carefully by hand.

Withering is a process which including moisture losing in fresh lwaves, softening the tea leaves,volatilizing a grass-like smell and developing aroma in the tea. 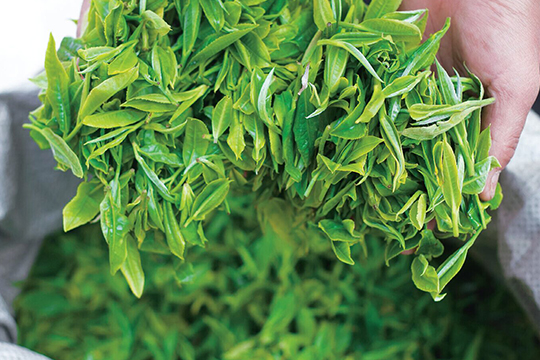 Tea leaves cell wall was broken in rolling machine,starts to bring out the color, aroma, teste and the shape of the tea. 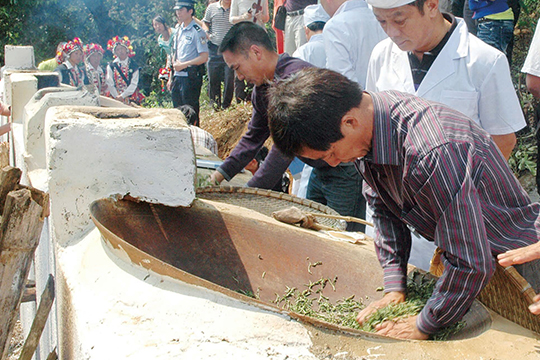 After fermentation, the color of the tea turns from green to red, with the grass-like aroma gone, thefruity flowery aroma comes out. 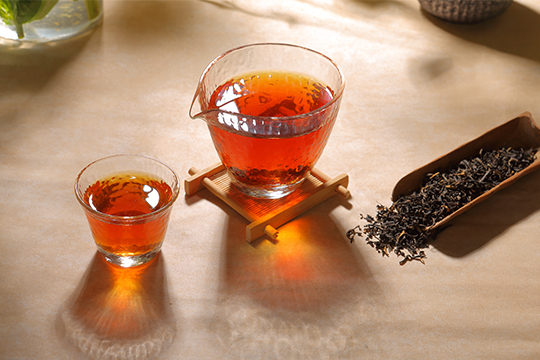 By drying the Fermented tea with proper temperature, reduce moisture and size of the tea, the shape of the tea can also be fixed,and with aromatic substance activated, the special sweetenss aroma of Dianhong tea shows. 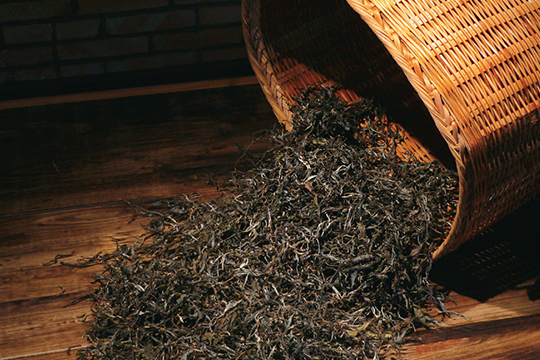