A Long History of Tea Plantation

Probably, no one will think of Bulangshan when drinking the “weird” caffeine-free Pu’er tea. But Bulangshan is indeed one of the major producers of Pu’er tea in Yunnan Province. Bulang people have toiled in this area from generation to generation, and they have been known as the oldest tea farmers as well as drinkers in the world.

The history of tea plantation of Bulang people can date back 1,000 years. Even today, many ancient tea trees are still thriving in the villages of Laoman’e, Laobanzhang, and Xinbanzhang etc-among them Laoman’e is nearly 1,400 years old. They are busy strengthening efforts to protect ancient tea trees and cultivating what is called ecological tea plantations. Since 1982 when the tea output quotas were contracted to households, tea industry has been taking up a large percentage of the local economy, and many new plantations have mushroomed.

During 1988-1990, in order to launch the “Tea Development Programme” in Banzhang Village, Menghai Tea Factory began adopting the way of cuttage and cultivated a plantation of about 200 Mu (13 hectares). Up to now, Bulangshan Township has relied largely on the tea plantation which benefits local farmers a lot. The tea acreage has amounted to at least 28,000 Mu (1,867 hectares), with the annual output of about 450 tonnes, worth over 10 million yuan ($1.57 mn).

First flush of spring materia from more than 100 years old arbor tea trees growing in Xin Ban Zhang village. Xin Ban Zhang is a neighbor village to Lao Ban Zhang and the tea from there shares much same character with Lao Ban Zhang Pu’er but not so bitter and pungent so it can be accepted and liked by more people even you try Green (raw) Pu’er for the first time. The leaf structure, mouth-feel and aroma is much the same. An intense cha qi accompanies the drinking experience. This intensity is the perfect fuel to transform this tea through the years.

There is a widespread misunderstanding that raw Pu’er can only be drunk after at least 5-10 years aging. In fact, raw Pu’er of good quality especially the ones made of tealeaves harvested from old or ancient arbor tea trees such as the Xin Ban Zhang Loose raw Pu’er is delicious even being enjoyed in current year. Of course, amazing changes can be found every several years if properly stored. Pu’er tea would change with time in taste, flavor and appearance so you may feel different when you try it. 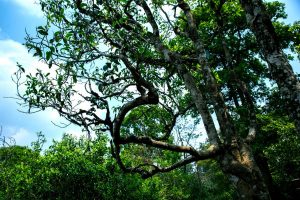