Zhangwai tea area(章外茶区)
Zhangwai is an old tea district in Shuangjiang. Now there are many ancient tea gardens in Ming and Qing Dynasties and in the period of the Republic of China.
Zhang Wai was once under the jurisdiction of Mengku Town in the early days of the founding of New China. And then it was classified as Heliu Town (贺六乡) in the 1980s. Heliu Town was merged into Mengku town in 2006, and Zhang Wai was also classified as Mengku town. Zhang Wai is far from Mengba and closer to Mengku Basin. Because Zhangwai is close to Mengku and connected with Haigong, Zhangwai is assigned to the ancient tea garden in the eastern half of Mengku Mountain in the division of tea districts. Zhangwai is now a village committee in Mengmeng Town. There are more than 10 natural villages in size. The ancient tea gardens in Zhangwai are mainly distributed in Yingpan Village(营盘村), Shangzhangwai Village(上章外村) and Xia Zhangwai Village(下章外村), Shitouzhai(石头寨) and Xinzhai(新寨) . These ancient tea villages are connected by an earthen road.

Yingpan Village（营盘村）
Yingpan village is located on the high side of the road with an elevation of about 1800 meters. The earliest inhabitants of Yingpan village are Lahu people. Now it is a Han people’s village with 50 families. Lahu people planted many tea trees in Yingpan. Now there are more than 10 remaining trees. The tree circumference is more than 80 centimeters, and the growth is very good.

Shangzhangwai (上章外)
Shangzhangwai Village(上章外村) is the largest village in Zhangwai Village, with 80 families and only 3 Lahu families. Sporadic tall ancient tea trees with a tree circumference of more than 100 cm can be seen on the hillsides around Shangzhangwai. These tea king trees are planted by Lahu people. Zhangwaihe River flows through the middle of Shangzhangwai village. There are ancient tea gardens on the slopes of both sides of the river, which were planted by Han people in the late Qing Dynasty and the early Republic of China.
Before 1949, Zhangwai Tea had become famous in Boshang Street(博尚街). Businessmen in Lincang Basin often rushed to buy tea in Zhangwai. The natural environment conditions in Shangzhangwai(上章外) are good, the land is rich in fertilizer and water, the fields are abundant, the tea garden is abundant, the economic strength is very strong. Although the villages are few, the people in the eastern and western half mountain not dare to look down on Shangzhangwai.

Xiazhangwai (下章外)
Xiazhangwai consists of two small villages, together with more than 60 families. The villages above are called the first group(Erzu/一组) and the villages below are called the second group(Erzu/二组). The first group, also known as Yang Jiazhai(杨家寨), has 21 families, mostly surnamed Yang(杨). Because there are many paddy fields, there are not many tea trees planted .
Several villages in Zhangwai have tea gardens planted in the early years of the Republic of China. There are a few old tea gardens planted on the hillside and in the middle of the new-style platform tea gardens. By 1950, the area of tea gardens had been very large. In 1954, Shuangjiang Tea Station had set up a purchasing point in Zhangwai. By 1955, 12,000 Jin tea was collected. At that time, there are only about 100 or so families in total in Zhangwai, so the output was not low.
Zhangwai is very close to Mengku, and once belonged to Mengku. Mengku people recognize Zhangwai tea(章外茶) as Mengku tea. Zhangwai tea is different from the tea in other villages in Mengku. One can feel sweet as soon as tasting it. Tea makers all like Zhangwai tea. 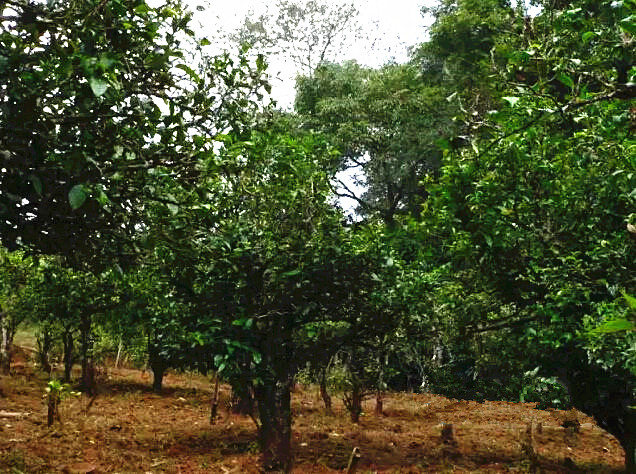