“Milk fan” is a traditional solid dairy product peculiar to the Bai nationality. It is mainly produced in Dengchuan of Eyuan County and has the shape of a fan. So, it is named as “milk fan” or “Dengchuan milk fan.” 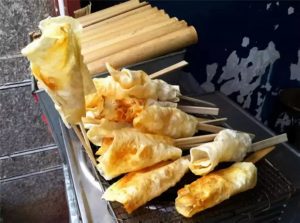 Although tasteful, milk fan is not complicated to make. The making process is: first ferment the milk into acidophilus milk and heat it in a boiler to a temperature of 70 to 80 degrees Celsius; then add some fresh milk and stir it with a wooden spoon. The acidophilus milk and the fresh milk flocculate and then agglomerate. Take the agglomerate out, knead it and then pull it into a thin piece that is about 20 centimeters long and 8 centimeters wide. Last, pull the two ends of the piece a little thinner and longer, and dry it with the two ends rolled around two slender bamboo rods. The distance between the two rods is about 16 to 17 centimeters and there can be more than 10 milks fan drying on them. After drying, the two-layer milk fans can be loosened and then taken off. As a tasteful food, milk fan is also rich in fat, protein, lactose and many other nourishing ingredients. Milk fans can be stored for a long time and are portable. The Bai people often entertain their guests with a dish prepared with milk fans, or give it to people as presents.

There are various ways to cook milk fans. Cook eggs with fresh milk and put some milk fans and rock candy, and then you have what is called “fresh milk, egg, rock candy, milk fans.” If you cook eggs with brown sugar and milk fans, you will have milk fan poached eggs. You can also cook other dishes with milk fans, such as “fried milk fan chips,” “braised sanxian (three kinds of fresh food) milk fans,” “deep-fried milk fans,” and “steamed stuffed bun with milk fan inside,” and many others. To conclude, milk fans are sweet when eaten raw, fragrant and spicy when fried, soft and tasteful when cooked, refreshing when steamed, and excessively aromatic when baked with some salt. Whichever cooking method you take, milk fans are always palatable and have a strong aftertaste. 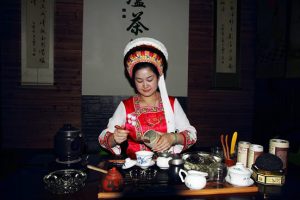 The tea ceremony, known as “three cups of tea (san dao cha),” is part of the ethnic Bai’s traditional routine of treating guests. Its history can be dated back to the Tang Dynasty, when Fan Chuo recording in a book on Barbarians (ethnic minorities),which says that “The barbarians gave me a drink, which was a cooked mixture of peppercorn, ginger and cassia. The famous tourist and explorer in Ming dynasty also noted “first a cup of clear tea, then a cup of salt tea, and last a cup of honey tea.”

The Bai people are very hospitable. When a guest or visitor comes to a house, the host will invite him into their main room and serve him with the so-called “three cups of tea.” There are two types of “three cups of tea.” One is baked tea, which used to serve ordinary guests. The method of making baked tea is: put selected Dayezi tea (a tea with large leaves) or Xiaguantuo tea into a jar, bake and shake it over charcoal fire until the tea leaves turn yellow and fragrance emanates, then pour a small amount of boiled water into the jar. Snow-white tea froths will then overflow the jar and its redolence will rush into your nose. Add a proper amount of boiled water, and then you can pour it into exquisite teacups to serve the guests. In teacups, the tea water looks like amber with crystalline clearness and irresistible redolence. Due to the noise the jar produces when pouring water into the baked jar, it is also called “thundering tea.” Since this type of tea is served three times in most cases, people call it “three cups of tea”-“drink the first cup for its fragrance, the second for taste, and the third to quench the thirst.” 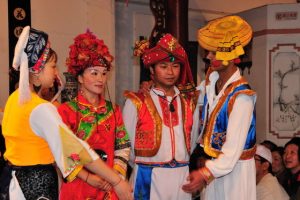 The other sort of “three cups of tea” serves senior guests. The first cup of tea — “thundering tea” – is made from local bitter tea. The second looks like soup. It is made from brown sugar, milk fan chips, walnuts, chayote, sesame, orange skins, and popcorn. It tastes sweet. The third cup of tea is made by mixing prickly ash, ginger, pine nuts, and Chinese cinnamon with honey and bitter tea. The tea set includes a jar, a porcelain mug, a tray, a copper kettle for making condiments, a small plane, a copper strainer, a spoon, a sugar mug and a condiment tray. The first cup of tea has the symbolic meaning of “To make great achievements, one should not fear hardships.” It also shows welcome to the guest. The second cup, the sweet one, means that after all hardships, the sweet will finally come. The third cup is pungent, with a distinct aftertaste. It suggests after going through all kinds of hardships, and enjoying the joys of life, one can recall both bitter and happy experiences. The custom has inherited the traditional tea culture that is unique to the Bai ethnic group and shows the spirit of our age. By showing the wisdom of life-“bitterness, then sweetness, and last aftertaste,” it reflects the beauty of Bai culture.

With the development of the tourism of Dali, the “three cups of tea” custom as a unique cultural inheritance has generated many new forms of cultural entertainments. Its combination with tourism, singing and dancing has brought out a lot of meaningful and special activities like tea party, tea banquet, and so on so forth. These activities have won the praise and favor of both foreign and domestic visitors.