People are beginning to recognize the Wanggong（弯弓） village,which keeps very good tea trees with very long ancient history and also was a landmark in Gumansa（古曼撒） tea plantation.According to the old people ,there were many villages with more than 10,000 people in Qing Xiangfeng（清咸丰） years.Wangong（弯弓） village and Gumansa（古曼撒） old street were most two prosperous villages in Yiwu（易武） tea moutain.in which it could think of the prosperity from broken walls of Guandi （关帝）temple.Afterwards,Wangong（弯弓） came to decline and fade out gradually from people’s vision.

Wangong（弯弓） village is located in Mengla（勐腊） Country XishuangBanna（西双版纳） which have a Han（汉） nationality with Guandi（关帝） Temple and a Hui（回） nationality with Mosque building.Guandi （关帝）Temple which covers about 6,000sqm and is the largest temple camparison with other six tea moutains, The beautiful building completely decorated with cedarwood ,richly ornamented building,golden painting and now only broken walls.

There were so many famous villages in Yiwu（易武） Town, Best- known for example， Mafeng（麻风） Village was the earliest,later was a GuaFeng（刮风） village .and nowadays,Wangong（弯弓） village is beginning to be recognized ,which keeps very good tea trees with very long ancient history。As of 2015，Pu’er（普洱） tea have risen to 3000Yuan per kilo. 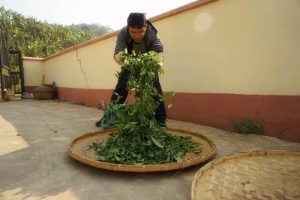 The details of the Pu’er tea, Wangong(弯弓)

From Dingjiazhai to Wangong, it takes one hour motorcycle ride and another hour mountain walk. The path for motorcycle ride is a quite narrow one, which allows only one motorcycle for each time. Both sides of the road are cliffs, which makes the road is extremely hard to pass, only the locals who are used to ride motorcycles can pass this route. The walk way is even harder, only can we walk on foot. 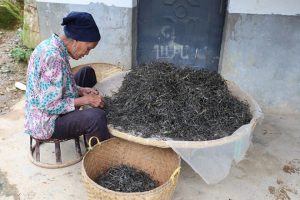 But the ecology is do good. The place is full of primitive forest. When you reach the deep end, there will be only one small river between you and the tea garden of Guafengzhai(刮风寨), which is seated on the opposite hills. People of Dingjiazhai also protect the ecology and reputation of this place. They’ve initiated regulations, forbade pesticides and fertilizers. Who violate the rules will be prohibited to sell their tea. Tea from Dingjiazhai and Wangong are also separately sold. This lead to the fact that the price of Wangong tea surpassed the tea of Guafengzhai in 2012 for the first time. Dingjiazhai people are indeed worthy of price, we wish them continue to carry forward and make it better. We hope that people from other regions can learn from them as well, for letting people enjoy more ecological great tea.

After one hour walking from Wangong, and climbing over a hill, there will be Mansa(漫撒) old street, which is also named Mansa Village or Mansa. Mansa is on the ridge of Mansa mountain, the street looks like a rising dragon from a long distance. The old street has high altitude and a wide view, a nice place for sightseeing. When you stand on the top of a hill of the old street, you can see the endless lovely mountains ahead of you, the veil like cloud floats between the valleys. When the wind takes the clouds away, you can completely see all the Yibang(倚邦) tea mountain, Manzhuan(蛮砖) tea mountain, Mangzhi(莽枝) tea mountain and Yiwu(易武) old street. 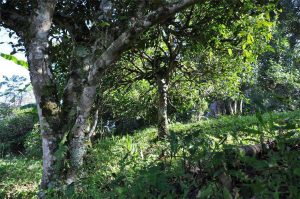 Eventhogh Mansa has a high latitude, the place is not lack of water. It is a quite livable place. Actually there were many minorities living in Mansa to grow tea approximately one thousand years ago. There are dozens of mu of thousand-year-old tea gardens near the mill place of upper Pusang(普桑) river in Mansa. The girth of the tea trees are over 150cm. This tea garden is the oldest tea garden among the six great tea mountains.

The characteristics of Pu’er tea, YiwuWangong(易武弯弓)

The characteristics of Pu’er tea, YiwuWangong: The Wangong tea is bright golden in color, soft, thick and full of taste, has the fragrance from primitive forest. The unforgettable taste long lingers in your throat which has strong persistence and stability.
Translated by Bella Zhang and Shi Shaohua/石少华